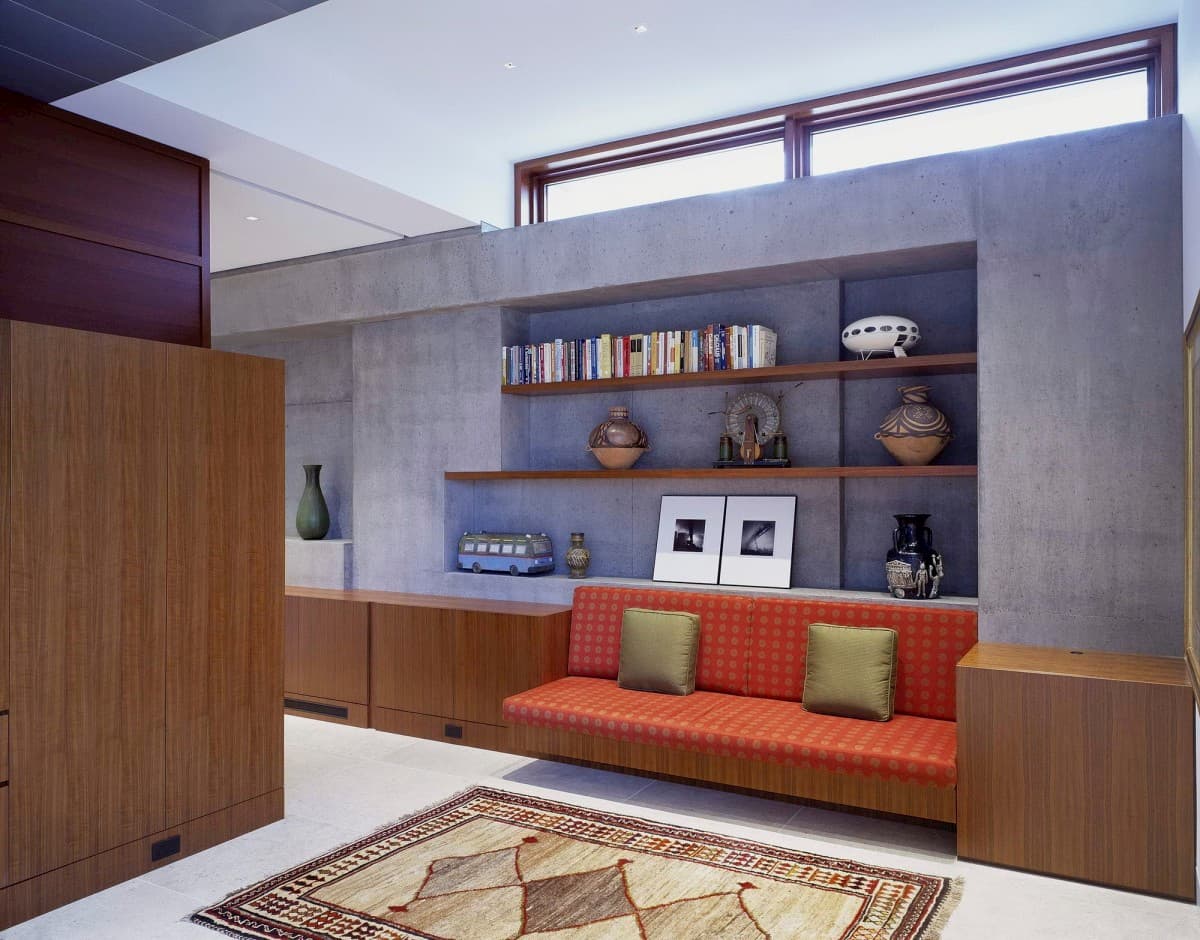 Concrete has a bit of an image problem: often being described as cold, or uninviting, leading some homeowners, designers, and architects to swear it off in favor of other building materials with more positive connotations.

Despite this negative image, however, concrete has proven itself to be an incredibly versatile, robust, and powerful building material, capable of playing both a structural and artistic role in modern architecture. This is why we have embraced concrete in its many forms as one of the plethora of potential materials with which our residential projects can be approached and constructed. Our design philosophy allows us to push the limits of what can be done with this seemingly humble material, while still honoring the true nature of the material.

Below we present five modern homes in which concrete plays a critical structural and artistic role.

At the Crescent Drive residence, board-formed concrete was used to create a focal point for the entire project in the form of a feature wall in the living room. Designed to be beautiful in its own right, this wall becomes a sort of display alcove in which artwork, books, television, and other items may live.

In addition to anchoring a floating walnut staircase, the feature wall extends from the interior to the exterior of the dwelling, reinforcing a sense of blurred boundaries between the inside and the outside of the space.

Like the Crescent Drive residence, the Ridge Mountain residence prominently features a board-formed concrete wall which was designed to feel like a natural material element rising up out of the landscape.

Compared to the wall generated for the Crescent Drive project, this one involved a much heavier sandblast, helping the structure feel more at home in its environment. The result is a sense of earthiness and permanence, an organic quality that will age beautifully. It is one of the primary walls of the home—one of the supporting “bones” of the house, not just a feature wall—and it extends from the exterior to the interior of the space.

The Waverley residence features a grand staircase consisting of cast-in-place floating concrete steps. The staircase spans the home’s three levels to become one of the structure’s defining features. Paired with a seamless 10-foot by 30-foot pane of glass, the result is a monolithic, minimalist, sculptural statement that embraces the dichotomy between the heaviness of concrete and the perceived lightness of glass.

In the Waldfogel house, concrete takes center stage in the form of a 30-inch-thick, three-story-tall, nearly 100-foot-long cast-in-place concrete wall. With no tie holes, the surface is incredibly smooth and highly sculptural, featuring multiple cavities which were designed to be used for the display of art, books, and other objects. Extending from the interior to the exterior of the home, the wall performs a number of critical functions. It is an organizing element running the length of the home; it acts as an anchor to the material palette of the house; it forms a threshold which someone must notice when changing rooms; and its heart, it is a piece of sculpture.

Although concrete is often believed to be a “cold” or “lifeless” material by many, this project is a great example of just how warm the material can appear. Complemented by wood and bathed in natural light, the concrete’s organic qualities are coaxed out.

As in Waldfogel, the 700 Palms residence prominently features a concrete wall which acts as an organizing element for the home, running the length of the main structure. Built from concrete masonry block, the wall becomes a prime example of the different ways in which concrete can be made custom and unique to an owner’s wishes.

The concrete itself is formed from a pumice-based aggregate, creating a lighter white shade than is typically found, which is paired with a rustic, heavy grout. The CMU wall contrasts beautifully with the concrete floor which was integrally colored with iron oxide and polished. The two in contrast showcase the various effects one can achieve using concrete. The results reference an interest in vernacular structure, in which local materials are used in a simple and practical way to create a beautiful effect.

Despite its sometimes negative connotations, concrete is capable of becoming a multitude of colors and shapes in order to fulfill the needs and desires of both architect and owner, as demonstrated in the projects outlined above. By understanding the functions to be performed and having a firm sense of the material palette of a home, it is possible to leverage concrete in new and often unexpected ways.